タイトル: Complementation in English and its formalization

As the title indicates, I shall talk about complementation in English and
how it might be formalized. The emphasis will be on laying out the facts as
clearly as possible, though I shall indicate briefly how the facts described can
be formalized, and without either movement or phonetically null elements.

The description reveals five problems which any adequate formalization
of complementation must account for. Two are the well known problems of
subcategorization and projection. A single solution for this pair of problems
was set out by HPSG. The three additional problems are the polyvalence
problem, the polyadicity problem and the permutation problem.

Let me explain what these last three problems are. Complement polyva-
lence is where the very same word admits complements of different syntactic
categories, though the word’s meaning is invariant under such changes. A
well-known example of such a word in English is the copula to be, whose com-
plements include adjective phrases, noun phrases, prepositional phrases and
adverbial phrases. Complement polyadicity occurs when words have optional
complements. Correlated with their omission is a systematic shift in sense.
Here are some examples from English: to eat vs. to devour, to arrive vs. to
reach, to dress vs. to clothe and to meet vs. to encounter. Complement per-
mutation is where a single word permits its complements to permute though
preserving its sense. These words include, but are not limited to, verbs with
indirect objects: to give (Alice gave a ball to Bill ; Alice gave Bill a ball ).

Time permitting, I shall sketch the formalization.

My recent research has been to modify the formalization used for English
complementation for application to Classical Sanskrit, a reputedly word order
free language. Recently, I have turned my attention to Mandarin. 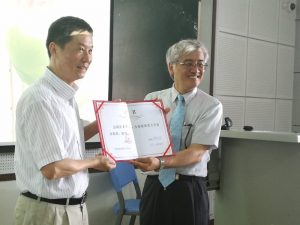